…is an enormous volume weighing almost five pounds and produced with such care the result is a book of the quality rarely seen these days. It is both a technical and a historical masterpiece!
Please see here for full details.

…is a complete academic guide to Shotokan, the karate of Master Gichin Funakoshi. This illustrated volume of over 500 pages also includes copious footnotes, endnotes, appendices, and an extensive index. Printed on the most beautiful coated European paper; “Pavarotti Silk” 100 gsm by an English press founded in 1756, it also presents the most extensive collection of historically significant Shotokan facts and photographs ever assembled.

Technically speaking, it is an archival quality hardback book, folded in 16-page signatures, sewn, and fully cased with gold blocked linen-covered boards and top and tail bands. It is finished with a laminated, full-color, wrap-around dust jacket. The foreword is by Morio Higaonna Sensei, 10th Dan Goju Ryu, the preface by Graham Noble the noted karate historian, and the book production team would go on to be commissioned by the Okinawan Prefectural Government to produce an official karate history book to commemorate the opening of the Okinawa Karate Kaikan center in 2017.

“A must read for karate researchers and students.”
—Charles Goodin, Hawaii Karate Museum

“…This is not merely a dry organizational history. Numerous stories concerning the more famous karate-ka and extensive quotations illustrate and give vibrant life to the historical narrative.”
—Robert Dohrenwend Ph.D. JAMA

“The second edition is one of the best books ever published on karate. I highly recommend this book for serious karate students and researchers.”
—Katsuhiko Shinzato, 9th Dan, Okinawa Shorin-Ryu, Kishaba Juku; Co-author of  the Karate and Kobudo Encyclopedia.

“This book should be included in the library of every serious martial artist, not just Shotokan practitioners, for understanding the whole picture is the best way to gain insight into one’s own style and thereby further personal development.”
—Morio Higaonna, Goju Ryu 10th Dan Hanshi, Living Intangible Cultural Treasure.

“Shotokan Karate A Precise History” is divided into an introduction, eight chapters, four appendices and an index. It is very well organized and although the amount and quality of information is a little overwhelming at first, one soon learns how to get the most from it. The first section of the book features a foreword by Morio Higaonna, 10th Dan Hanshi, and a “Living Intangible Cultural Treasure of karate. Obviously this is a book to be taken seriously.

Chapter 1 Okinawa This deals with the historical background of the Ryukyu Islands and how a culture developed that would give birth to modern karate.

Chapter 8 Shotokan for the World Kanazawa in Hawaii, European pioneer Henri Plée, Hiroo Mochizuki, Tetsuji Murakami, Tsutomu Oshima, the British Karate Federation, the JKA in Britain, the Karate Union of Great Britain, Shotokan as a sport, Shotokan in America, the AAKF/ITKF etc., the future of Shotokan.

Appendix A When historical information is introduced in the main text a source is given in the form of a footnote. When the footnote exceeds more than a few lines (and they often do) the additional material is placed in the end notes (Section A). This prevents the flow of the book being interrupted while allowing the reader to go back at his or her leisure to read the minutiae. And what a pleasure this is. Some end notes run to several thousand words – essays that offer fascinating information not available elsewhere.

Appendix B This is a list of the Shotokan kata and their origins.

Index The index is very well organized, comprehensive, and easy to use. Without it navigation through the myriad subjects and thousands of footnotes this book contains would be difficult. With it the book is a genuine pleasure to read and to study.

Printed by Page Bros. of Norwich, England, a company founded over 250 years ago, it is printed on a Heidelberg flat sheet letter press, then the sheets are folded into signatures before being “French Sewn” in the time-honored tradition for durability and to allow the volume to lie flat for the readers convenience. The book is finished with printed end-covers, top and tails bands, heavy duty linen covered boards, gold embossed, and finished with a four color wraparound dust jacket. The workmanship is just superb and gives this volume a presence that few book on the subject can even approach, let alone equal! 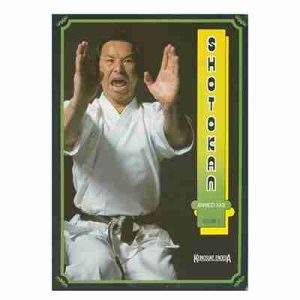